Walking from the hotel towards the tram stop of line #23 on Czynszowa I encountered many houses that do need immediate action to keep them „alive“. But I was told later by the tour-guide that it’s only the outer walls that do look ugly. Most of the buildings are inside in almost proper shape and people are living there. Prices per square meter range from 2,500 up to 4,500 EUR which sounded unbelievable high to me compared to the average income of a Polish craftsmen/worker which equals between 1,500 to 2,800 Zloty as I was told by several people! I did see many cars at the roadside that obviously have been standing there for a very long time: obviously not used for a long time with flat tires and blind windows. A scene to think about. And that was what I did: Why did I choose to go to Warsaw? Because the Old Town is a World Heritage Site listed with the UNESCO. 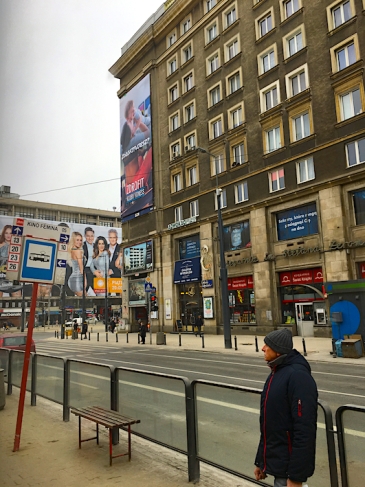 on tram #23 close to Kino Femina

The tram took me from Praga over the river Vistula almost to Old Town. I passed by the Royal Castle that as well as the old town itself and the city was bombarded and totally destroyed during WW II. Thoughts regarding that time came into my mind and made me think about it and what German soldiers had done at that time before the Warsaw Uprising started. But I am here, sitting in a modern tram and it’s the 21st century.

Now the tram crossed the modern town center where skyscrapers, the Palace of Culture and Science, banking blocks and business centres dominated the scenery. It all look not very shiny and the weather did its part. My mood didn’t rise again. I did see little street markets where people have been selling their last goods – that what I felt to see.

Not very well and wealthy dressed people were wandering around and trying to value what they get offered. I did feel that the gap between rich and poor is much bigger than in Germany. Maybe I’m wrong. I have to figure it out …

At the very end of the line – in Nowe Bemowo – the tram turned 180° and stopped that all passengers could disembark. The area I was in could have been somewhere in the western world: Middle development, suburban atmosphere and mixed social classes. I jumped on the next tram heading back „home“ towards Praga. I needed to take a shower, unpack my things and get something to drink and eat. It was almost five o’clock in the afternoon and time to it.

The ride took me back in about 50 minutes. The last 300m distance was easily achieved and my luggage waiting for me. I was very much looking forward to move into my hotel room „Light Box“.

The room was tastefully furnished, well designed and comfortable equipped. When you go to the website of the Arthotel Stalowa 52, you’ll see the room Light Box right on the homepage as the center image. I liked it from the beginning and didn’t change my mind. After I made myself feel like being kind of home, I decided to plan for my evening dinner somewhere at a nice, little restaurant. 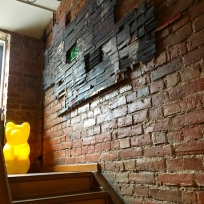 Staircase to the 1st and 2nd floor

seating area in the restaurant

Although the restaurant in my hotel looked nice and fancy at that particular evening they had a private party where I didn’t belong to. Therefore I followed a recommendation and took a taxi to the Soul Kitchen in the city center. This restaurant is very authentic, supports the slow food idea, offers good wine and cocktails as well as serious live music played on the piano.

I was lucky that I could find a table for myself because this place was packed by locals. I started with a G&T (Hendricks) followed by a pumpkin soup. When I finished it up I ordered a goat cheese salad with some homemade bread. This salad was a huge portion so I didn’t need a main course. I closed my stomach with a Cappuccino and a Port wine.

Although I could have taken a tram or bus going back to the hotel, I decided to take a taxi again. It was convenient – because it was raining – and kind of affordable. Both trips came up in total to 60 Zloty including tips.

What a day: My first day in Warsaw! I went to my hotel room as soon as I reached my destination. I logged my Mac Book into the Wifi network, wrote and sent a couple of WhatsApp messages, checked my emails and fell asleep as soon as my head hit the mattress.